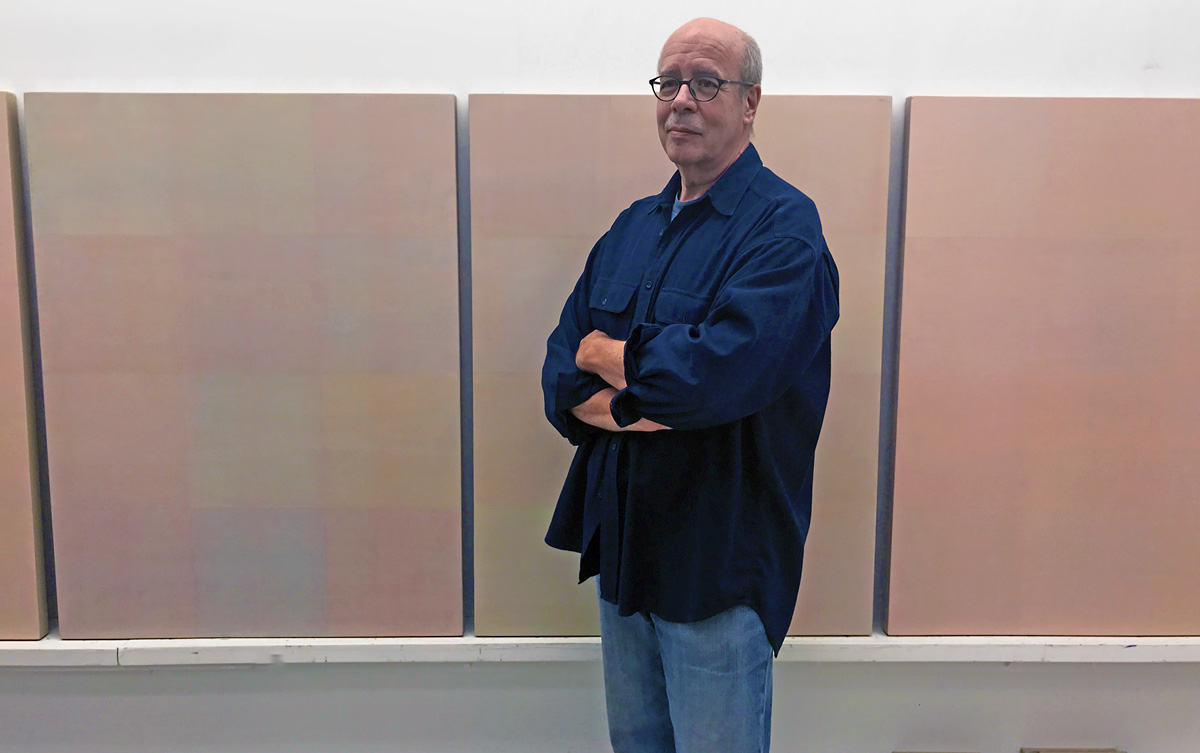 Berman was raised in New York but settled in New Mexico where he has maintained a studio practice since 1993. Early on, Berman attended the Music and Art High School in New York City, then the Pratt Institute in Brooklyn, and worked for The Metropolitan Museum of Art in New York City.

Richard Berman moved to New Mexico in 1993. He built a studio in a warehouse on the edge of an arroyo and began to make art. He regularly destroyed everything he made for years. In his search for something that satisfied his educated and particular eye, he investigated all sorts of material. He read and studied politics and culture while he built and dismantled/drew and shredded his many and disparate ideas until he came upon a process that was not only perfectly crafted but one that held his attention and expressed his true artist’s sensibility.

Berman has shown with Linda Durham Contemporary Art in Santa Fe for many years, and is now represented by NuArt Gallery in Santa Fe. His work is featured in collections across the nation.

Painter Richard Berman likens himself to a baseball player: he feels lucky to bat .333. He’ll tell you that, on a good day, one out of three of his paintings might be successful. And like the baseball player, Berman doesn’t know ahead of time what’s going to work and what is not. He just keeps stepping up to the plate and swinging at the best pitches, discovering in real time if he’s going to strike out or get a hit.

Of course, years of practice tend to stack the odds in favor of a talented athlete; conversely, unlike athletes, artists continue to improve as they age. Berman has been practicing his craft steadily for the past decade. Throughout his adult life, the artist has experienced what he calls a lot of “starting and stopping,” allowing his creative muscles to fallow, as it were, during a period of recovery. Fortunately, for Berman, “Art is nothing if not compelling.” Painting always calls him back to the studio for another round of spring training.

A good deal of Berman’s modesty about his artistic batting average has to do with his unrelenting mental discipline and his physical technique, which he calls “glazing in reverse.” The painter scumbles layers of acrylic and latex paint atop wood panels, applying multiple layers of pigment he’s personally tweaked into the perfect hue. Finally, he begins sanding, removing strata of color to reveal the underpainting. This is the trickiest part, as it’s a process that cannot be predicted or formulated—one is tempted to remember the ideology of Action Painting, in which the artist allows the body to take over in a nearly autonomous fashion. Berman applies this lifetime of the muscle memory of pushing paint on panel while thinking nothing, in a Zen-like paradox of frenzy and calm. Although he keeps track of the colors he uses in each painting and makes sketches on small panels, none of his paintings can be replicated with any degree of exactitude. Touch ups are not a part of his vocabulary. And the viewer gets the feeling that Berman prefers it that way. Even though the artist may feel disappointed when, after applying layer upon layer of paint, the final results are not what he expected or hoped for, he seems to enjoy the sheer joy of teetering at the cliff’s edge.

The notion of freefalling suggests too rapid a process, though, to be an accurate analogy for the paintings that Berman makes. He refers to his work as slow painting, intimating that the viewer’s best experience comes with time. These are not paintings to walk past quickly and immediately grasp in the 20 or so seconds the average visitor gives to each artwork in a museum. Slow looking reveals hints of graffiti and landscape, calligraphy and biology.

Many years ago, Berman worked at the Metropolitan Museum of Art in New York City. He fondly recalls spending time looking at Islamic script, the hidden art of cursive geometry delivered with an obsessive love for the filling of a surface. It must be noted, however, that comparisons to the handwritten gestures in Berman’s art don’t disclose his love for color—surprisingly, perhaps, Matisse is one of his heroes. Truly, Berman’s work is as much about light as it is about process and layered meaning, both metaphorically and physically. Most tellingly, Berman favors the paintings of Mark Rothko, Ad Reinhardt, and J.M.W. Turner. Altogether, it is Berman’s thorough knowledge of Eastern and Western art history, both ancient and modern, that informs his approach to painting.

Take your time with Richard Berman’s abstract paintings; allow the microscopic details of life at a molecular level to bubble up to your visual consciousness while you enjoy the rhythm of their movement. Find the hand and heart in the work, those moments that are the reward for contemplative viewing. As the textural and retinal nature of these objects come through in a glimpse of a brushstroke, you may find yourself experiencing the deeply rewarding process that we might call Layered Looking. 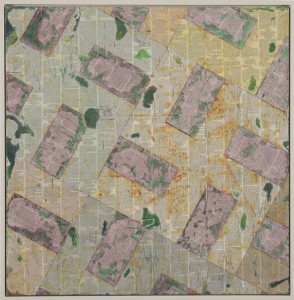 The wars in Afghanistan and Iraq lack several things: foreseeable ends, an abundance of media coverage, and easily demonized enemies. Al-Qaeda just doesn’t have the visual branding the Nazis, the kamikaze pilots, or even “Charlie” had during previous wars. Sure there’s Saddam Hussein, but he’s dead. And, no matter how the propagandists might try, Osama bin Laden is just no Hitler. Actually, he’s more like Bigfoot at this point – a dangerous creature, occasionally sighted, with no real evidence of where he lives.

For an artist such as Richard Berman, whose works are both politically charged and actively engaging, propaganda is a necessary piece of the puzzle. Berman takes symbols of the American flag and the swastika and remixes them for his own purposes, creating an aesthetic similar to the movie-like imaginings of World War II and the protest-heavy ideals of the Vietnam era.

Though all the works in his exhibition are called Rise or Fall, they do not focus on the same ups and downs. Rise or Fall, #1 through #3, focus on the American Dream. The acrylic and mixed-media works feature classified ads layered with American flags. These flags are not the patriotic, waving flags of baseball games and the Fourth of July. Instead, these flags are folded into themselves, the apexes of their cones pointed in the direction in which they plummet – save for the flags that have already landed, and rest, seemingly broken, on the dirty, newsprint stained ground.

Ten of Berman’s works focus boldly on the image of a swastika–ranging from the blatant to the discreet. Each work incorporates obituary notices as its background, and in works #5 and #6 it is the texture of these notices under a blanket of red paint that reveals the iconic shape. these seemingly standard contemporary works challenge the viewer, forcing him or her to think about why the artist chose a swastika, and what that symbol means. Most obviously, in the Western consciousness, the swastika is associated with the Nazi regime of World War II. It brings to mind massacre, consolidated and unchecked power, and attempted conquest. It reminds us of the rise and fall of a political system so frightening that its symbol is still illegal in the country from which it sprang.

Elsewhere, however, the swastika has many other meanings. For Hindus, the right-facing swastika found in Berman’s work is representative of universal evolution — a concept that requires death in order for rebirth to occur. For many Buddhists, the insignia is one of eternity and can protect children from evil spirits that haunt the world. It gives the visual story of the formation of Mount Kailash, a peak sacred to Hindu, Buddhist, Jain, and Bon religions. The Hopis saw the swastika as a symbol of wandering and the Navajos believed it to be a mystical device of healing.

But knowing all this doesn’t make Berman’s work any less political. By placing the swastika over newsprint he reminds us that in the past we read about war in the papers, that every day the headlines told us how the effort was going and who had been lost to the enemy. In today’s wars those lost soldiers go unnamed, and so Berman uses the everyday people of the United States, who die through a variety of causes, as stand-ins. In turn, those substitutes also become the nameless many dying on the other side of the conflict, the civilians who are caught in war, not through patriotism but because of geography. The names in the work’s obituaries could easily have ended up there through more violent means, if the war had been fought at home.

Through his art, Berman reminds those on the home front of military action–past and present. He throws in our faces the preconceptions we have of ourselves and of international conflicts, and forces us to re-evaluate our position.

What we know of the men who brandished the swastika in Europe is enormous in comparison to how little we know of the ones who fight in the deserts of the Middle East and South Asia. That Berman is willing to engage us via a taboo symbol makes his work all the more powerful. This image, juxtaposed within the same body of work, carrying the same theme, the same name, and the same artistic aesthetic as an icon Americans find not simply harmless but comforting, asks us to see that symbol as the other, from another point of view, and feel empathy for the victims of the American dream both at home and abroad.